The Vélocity Bicycle Cooperative could not exist without our dedicated and inspired Véloteers and board of directors to support our mission to build a stronger community through growing and empowering biking as sustainable transportation. The people of Vélocity are focused on instituting the foundational standards needed to ensure Vélocity Bicycle Cooperative is viable and will be here to support our area for many generations to come.  If you would like to learn how you can get involved, please visit our Véloteer with Vélocity page.

Joe Davison has been a Vélocity Coop Véloteer since 2015. Joe became the Vélocity Coop Events Coordinator in November 2017. In this role, Joe is responsible for making sure all of the Vélocity Community Programming Events are a success and that everyone had a great time.
Joe is recognized as one of Vélocity Coop’s most hardcore cyclists, commuting from his place in Northeast DC to Falls Church Skyline regularly in all weather — ranging from hot and muggy to snow and wind. Joe is also well known for his bike tech and gadgets, his love of catching live music with his girlfriend, and traveling abroad several times a year.

Along with Christian Myers, John Patterson co-founded Vélocity. In his other life, John was a UN staff member in New York through 2008, and continues as a consultant supporting UN agencies and non-profits engaged in international development. In 2014, John moved to California but continues to assist the Vélocity Coop as a Board member, and spends time riding his Vélocity shop nurtured 1987 Bianchi Brava along the streets and beaches of L.A.

Steve Walz has been biking since hauling newspapers in the front basket of his balloon tire Schwinn Tornado as a youth. He learned basic maintenance and repair during his college years from the owner of a one-person shop, Fuji Cycles of Worcester. Since then, Steve has seen the strength of community and came to volunteer at Vélocity Bicycle Cooperative to give back and both learn from, and spend time with, fellow bike people. When the Véloteer urge calls you, Steve looks forward to meeting you and seeing you around the Vélocity Coop shop and warehouse!

Mike Pattisall is one of the original Vélocity Bicycle Cooperative Véloteers. Mike has been a valued member of the Vélocity Coop Board of Directors since 2012 and served as the Board Chairman from 2014-2016.
Mike loves collecting bikes and is well known for leaving silly stuff around the warehouse to liven it up.

Marty DeVine joined the Board in 2015 because she is passionate about safe cycling and especially the importance of wearing a helmet. In addition, she believes that having a reliable bike can change lives as a result of the fitness benefits of cycling offers and the freedom cycling provides to go almost anywhere at no cost. Marty chairs the Vélocity bike scholarship venture which helps financially challenged individuals earn a bike, lock, light and helmet and learn how to perform basic maintenance on their bike. She is also involved in several other Alexandria and Washington, DC nonprofits, but Marty particularly enjoys the Vélocity Coop’s generosity, can-do attitude, infectious enthusiasm, diligence and compassion for enhancing the local bicycling community.

Bayley got involved in the Vélocity Bicycle Cooperative as a volunteer in 2012 when he grew tired of putting a hole in his wallet paying for tune-ups and felt it was time he learned to do it himself. Bayley continues to be inspired by all the work that the Vélocity Coop does in the greater Washington, DC community and truly enjoys his time shared with the tight knit Vélocity Véloteer family.

One of the Vélocity founding fathers, Christian Myers serves as the Vélocity Bike Shop Manager and Community Outreach Coordinator.
Other than bicycles, Christian is an expert in tattoos, muscle cars, AC/DC, fishing, and telling funny jokes. When he’s not at the shop or spending time with his family at home, he can often be found at Nationals Park catching a game.

Kyle Goodwill has been our dedicated leader since 2015 and is responsible for organizing the Vélocity Community Programming and providing guidance to véloteers.
When he’s not véloteering, you can probably find Kyle engineering software, combing his long lush beard, drinking fine dark beers, or spending time with his girlfriend and their cats. 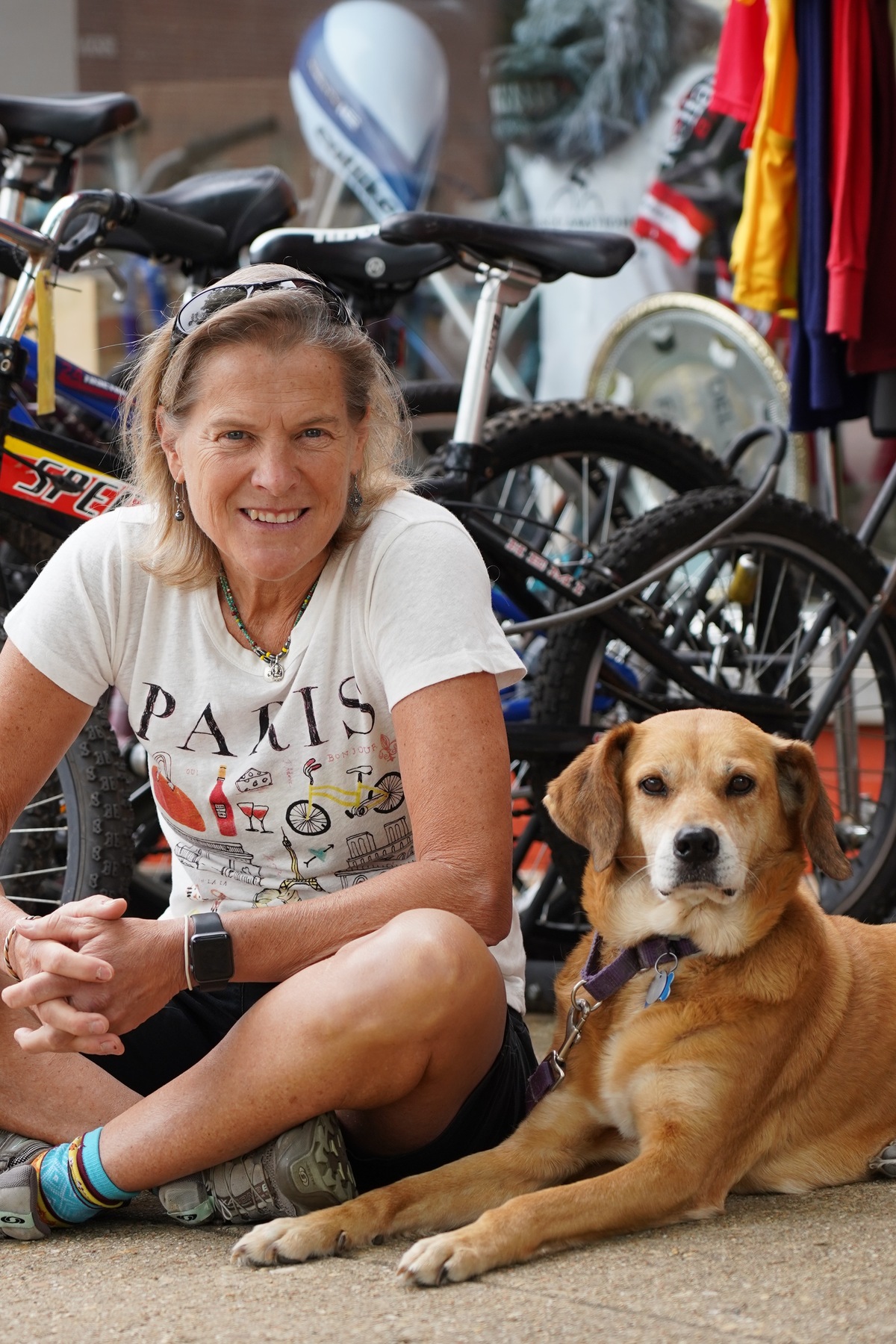 In early 2018 Patti decided after 38 years in television to work less with NBC news and more with bicycles. It became very clear to her that bicycles made people and herself a lot happier than the news did. Most Saturdays you’ll find her and her shop dog Zipper at Velocity trying to keep a zen atmosphere for Russell the bike whisperer, but also making Jim and Zach crazy by poorly singing Carpenters tunes.

Zach’s been a Vélocity Véloteer since 2015. If you know Zach but don’t know that he’s a proud Vermonter, then you’re merely an acquaintance. He has twins in high school and is one of the most prominent Vélocity Coop cyclocross enthusiasts.

P.J. Rusello has served as the Vélocity Cooperative Quartermaster since 2016. P.J. is responsible for making sure véloteers have the supplies they need and that inventory is effectively managed.
Outside of the Vélocity Coop shop and warehouse, P.J. rides a cargo bike to work where he’s a Marine Biologist

Paul Toler is the Vélocity ambassador to all new véloteers. He’s happy to help get you involved in our organization through an orientation, training, and provide unique opportunities for you to support us based on your skills and interests.
An avid rider and commuter since high school and a landscape architect by day, Paul can usually be found either spending time with his fiancé at their place in Old Town, hanging out at the Vélocity Coop shop or warehouse, going for a ride on a nice day, or trying to catch a Hokies football or basketball game.

Ron Kellis is a former aircraft mechanic and maintenance test pilot, and has been turning wrenches most of his life. He joined Vélocity Coop in October of 2010 after telling Christian “he knows enough to be dangerous." After a month Christian agreed.
When Vélocity Coop moved to Mount Vernon Avenue in 2012, Ron quickly became known as “Mr. Wednesday Night" for his consistent volunteering during open shop. As the primary Vélocity Cooperative Basic Maintenance Instructor, Ron has taught over 200 students in 85 classes to date.

David started volunteering with Velocity in 2017. He’s responsible for making sure volunteers have the supplies they need and that inventory is effectively managed. He regularly bikes to work and can be found at the warehouse on most Thursday nights. One of his favorite dishes to cook is spaghetti carbonara.

Jerry Cowden has been volunteering with Vélocity Cooperative since 2014. He’s been a longtime enthusiastic bike tourist since he retired in 2010, every year spending the late part of his summers traveling the world with his Bike Friday, meeting new people along his way, and experiencing different cultures. He’s fluent in French and is the reigning Vélocity Cooperative “Bake off Champion."
Jerry met Bayley Vanderpoel as neighbors in 2010 and got involved with Vélocity Cooperative as a regular véloteer shortly after Bayley started.
He particularly enjoys supporting the Vélocity Cooperative Pop-up Bike Shops to ensure our community members all have access to safe, reliable bicycles.